Well it has been a long time since the last post ( and that's not a euphemism ). I've been thinking about the station building and its  finish , considering I have now covered the engine shed in stone paper.
The Station building was hand painted , way back in what seems like another century. I had wished that the finish of all the buildings would look of the same "style " of build, but having had no success in the finish of the engine shed by hand painting I had resorted to stone paper which is seen in a previous post. Now this was not going to match in with the style of my other buildings. Doh!
I could have used the stone paper in the Outback model kit again but decided to keep this for when I eventually build their kit . The Outback kit is of the extended version and one which I do eventually hope to get around to building and Iam told , uses photograph images of the stone work.
I contemplated driving to Lynton to take pictures of the station itself to produce digitally my own stone paper, and then ... An idea. Google Earth. Now then , it occurred to me that if I could get some screen shots of the station building from Google Earth how would that look? Well .. Not bad actually. So after some judicious cut and paste using my iPad and re - sizing in pages I was able , after some trial and error , to produce some usable sheets of stone paper which are after all, the actual stone used on Lynton station. It took some time to cut and "wallpaper"using watered down PVA but the end result I feel looks much better than the painted Plastikard . Here are the results of my efforts.
Lots more to do yet.... 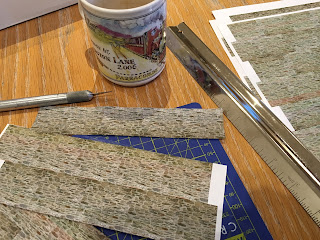 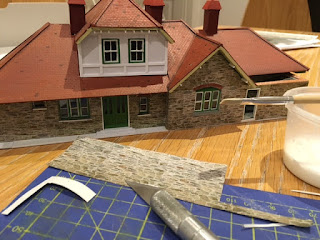 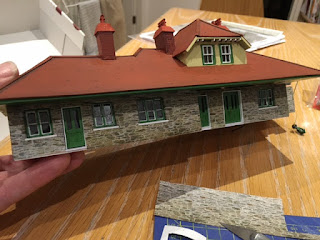